In 2015, I was hired to lead design at the AT&T Foundry Innovation Center, and in that role, led projects, trained team members, and even worked on an initiative to bring design thinking tens of thousands of AT&T employees.

I delivered design workshops and coached more junior designers to do the same, both inside and outside the company.

During my time at the Foundry, I was frequently consulted on how to apply design thinking to products, teams, processes, and business models.

I trained my teammates in design thinking organically through collaborative projects and more formally through coaching and workshops. In turn, my colleagues are now applying design thinking to their work. As they pursued User Experience design and research projects, I supported and guided them as a coach and consultant.

With the confidence they gained through the training and coaching, some are now leading workshops of their own. 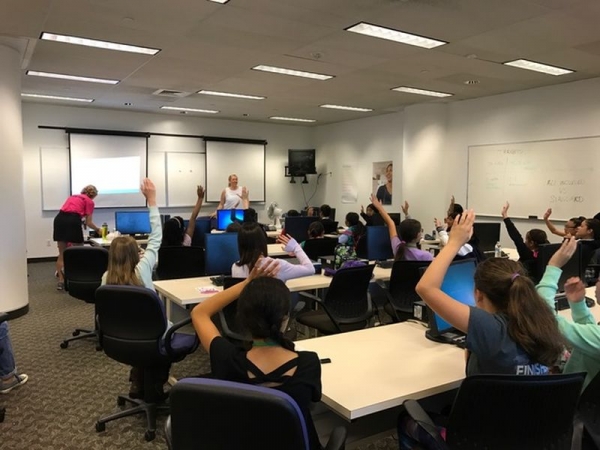 In 2016, one of the teammates I had trained earlier in the year joined me in conducting interactive design thinking workshops for middle school and high school women interested in technology. Read more about our contribution here: AT&T hosts Girls in Future Technologies (GIFT) Day.

We continued that momentum and ran another workshop for the AT&T Technology Development team. Soon after, she began hosting her first workshops on her own.

With her new skills, one Foundry designer led a joint design thinking project for AT&T and Ericsson. I coached her as we developed a ten week plan to apply design methodology to AT&T’s Mobile and Voice team’s search for new business growth opportunities.

We began the project with market and user research to dive into the problem space and identify a key theme to explore further.

Then, we worked with an external design thinking consultancy to conduct a workshop for Ericsson and AT&T Mobile and Voice team members.

In the third phase of the project, we applied the design process to the business unit’s previously identified theme. The team began by empathizing with users and ended with prototyping and testing with users.

The insights and tested prototypes led to direct product roadmap changes for new use cases and features. In the long term, we infused leaders in the AT&T Mobile and Voice team with the tools and mindset to operate outside of their current structure and processes so they can be as agile as their competition.

My design thinking training and coaching increased the amount of design occurring at the Foundry. Through training, we grew new Design Thinkers amongst our greater team. With coaching, we honed skills and amplified our ability to apply design thinking to more projects.

Our workshops were so successful that we were annually invited to train internal teams and GIFT students. There were so many requests that we began being more selective with our workshops so that we could focus on our design projects.

My design team repetitively identified and solved difficult problems in short periods of time. When one of my interns dug into the needs of Uverse and DirecTV techniciansâ€”research that lasted no more than three weeksâ€”he uncovered so many high impact opportunities that the responsible Senior Vice President allocated millions of dollars to address these findings.